International recording star, Author, songwriter, promoter and producer Billy Poore has lived his life immersed in the vibrant rockabilly world. As a dancer on the Milt Grant TV show in the 50's, he met the big-name stars and musicians of the day. Since then, he has founded the Renegade Records label and a BMI affiliate music publishing company called Rollabilly Music, written for many magazines and liner notes, and produced several music documentaries.

v             Project coordinator, co-producer with Ray Walker (bass singer with the Jordanaires) and songwriter of 9 of the 12 songs on the soon to be released “Baby I’m Back” album by Canadian tribute artist Danny Boy Squire.

v             July 5, 2004, marked the 50th Anniversary of the first time Rockabilly Music was captured on tape by Sam Phillips at his small “Sun Records Studio” in Memphis, TN; the artist was Elvis Presley. The songs were “That’s All Right Mama” and “Blue Moon of Kentucky”. The Sun Rockabilly sound was invented. Elvis Presley, the first Rockabilly star at 19 years of age, had just begun his 23-year recording career which would lead him on to become the greatest artist and performer of the 20th Century. On this date Billy Poore was one of the select group of artists and performers who were asked to perform Rockabilly songs on a stage in the street in front of the original Sun Studio at 706 Union Ave., Memphis, TN. Other performers included Scotty Moore, D.J. Fontana, Sam the Sham, Ronnie McDowell, Isaac Hayes, Justin Timberlake and many others between 12 noon and 12 midnight. Over 3,000 screaming fans attended this event.

v             October 2005 & October 2006: At England’s prestigious Oxford University, Billy Poore was asked by the head of their music department to come over and lecture, do his favorite reading and conduct music seminars on his book, “Rockabilly – A 40 Year Journey” which has been used each year since 2003 by the Oxford University Music Department as the best resource in the world to teach future generations about American popular culture, slang and music during the mid to late 1950’s and beyond. 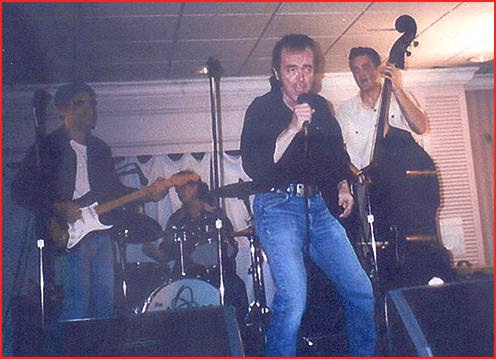