Elvis Presley, Johnny Cash, Carl Perkins, Jerry Lee Lewis, Charlie Rich, Warren Smith, and Charlie Feathers. Chances are most people know who these recording legends are, and at one time they all recorded for the famous Sun Records, owned and operated by the legendary Sam Phillips.

Another fellow who recorded for Sun Records in the mid-50's, Jack Earls, has actually become more famous in the last 20 years than earlier in his performing career.

"Slow Down", "Sign on the Dotted Line" and "Crawdad Hole" are just some of Jack's Sun releases that are being played more than ever today. Jack's booming, strong baritone is as good now as it ever was, so he ain't "slowin' down" so easy!

Jack Earls turned 70 years young on August 23, 2002. His popularity, in the United States and the rest of this planet, is higher now than it has ever been. European festivals vie for the opportunity to bring him across the Atlantic Ocean to tour, and Jack has played every major rockabilly festival in North America in the last two years, including Viva Las Vegas, Rockin' 50's Fest at the Oneida Casino in Green Bay, Wisconsin, the Indianapolis Rockabilly Rebel Weekend, etc., etc.

Lisa Earls, one of Jack's six children, organized a surprise party in Detroit on September 20, 2002. Craig "Bones" Maki, a long time friend and supporter of Jack Earls, helped Lisa to bring about a fine evening with many artists and special guests. Craig Maki's own band, Bones Maki & the Sun Dodgers, was the "host" band for the evening.

Jack Earls was told that Lisa was performing with Craig's band, and that was the premise of getting him to come to the Third Street Saloon in Detroit. When Lisa brought Jack to the party, you can tell from the picture below, he was genuinely surprised. 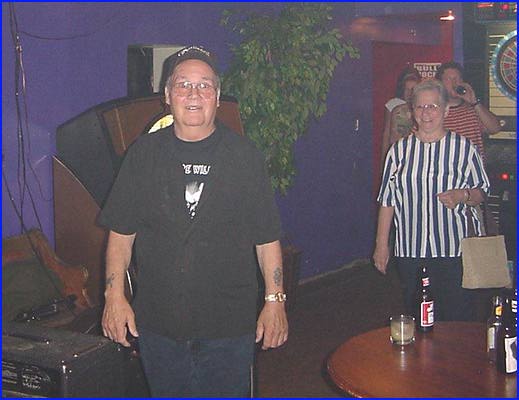 "SURPRISE!" JACK EARLS IS GENUINELY SURPRISED AS HE ENTERS.
THAT'S HIS WIFE, DOROTHY, A COUPLE OF STEPS BEHIND. 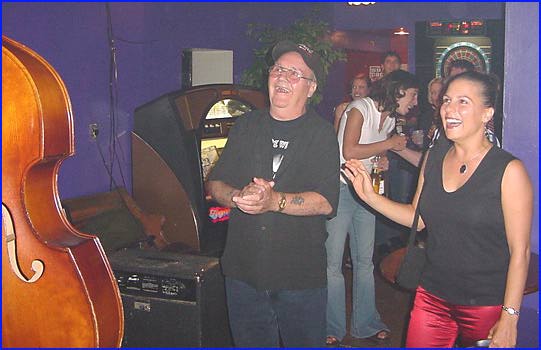 Other members of the Earls' family who attended: Dorothy, Jack's loving wife for many years, his children, Jackie Jr., Mike, Lenny (Lisa's twin brother), and two nephews, Jack Earls III, and Pete, who are Jackie Jr's sons. Jack's daughter Janet was unable to travel from Virginia, and son Steve was ill, but the Earls clan was well represented at the party!

After the audience welcomed Jack, he settled in and was presented with a commemorative trophy by Craig Maki. Craig's band played about an hour and a half set, and Jack joined them on stage to sing several of his hits. 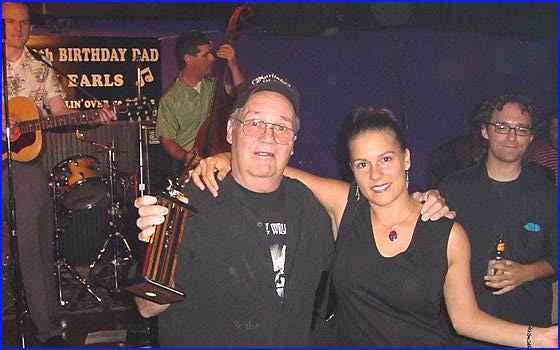 Bones Maki & the Sun Dodgers includes Bones Maki on vocals and rhythm guitar, Graham Tichy on lead guitar (Graham flew in from his home in Rochester, New York for the occasion), and Kenny Bruce on bass. 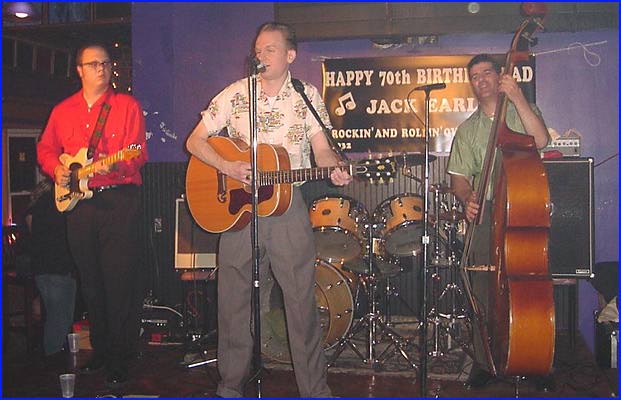 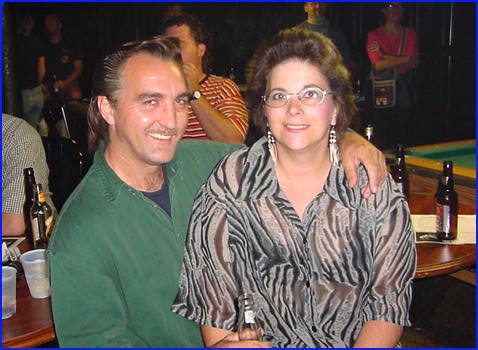 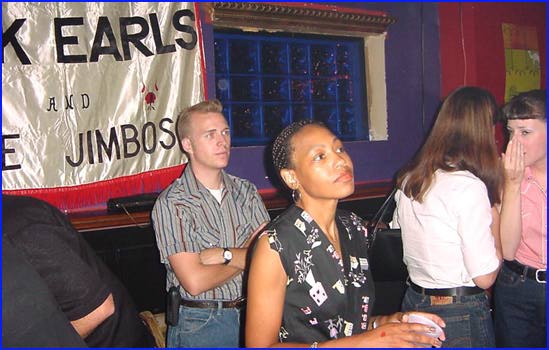 KEITH JASON (CADY) OF 1480AM AND DARLENE, KENNY BRUCE'S WIFE.

Keith Jason Cady, a local disc jockey and country music/rockabilly aficionado, joined "Bones" and his band as a musical guest, playing his mandolin. 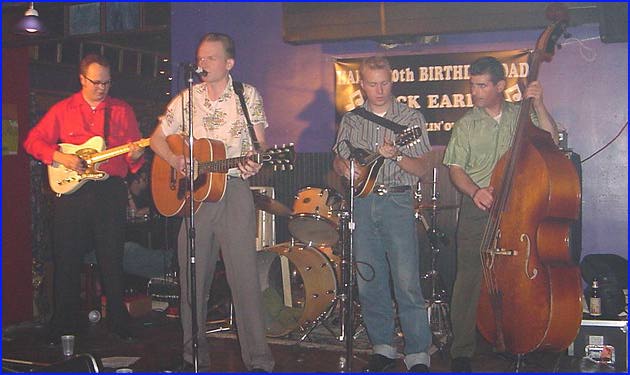 Loney Charles, a buddy of Bones and Kenny, and former member of Big Barn Combo, dropped in on drums during Jack's set. Attending the party with Loney Charles was Rudy Varner, the webmaster for Planet Rockabilly www.planetrockabilly.com, and bass player for the Hi-Q's, as well as Jack Scott's band, the Top Ranks. 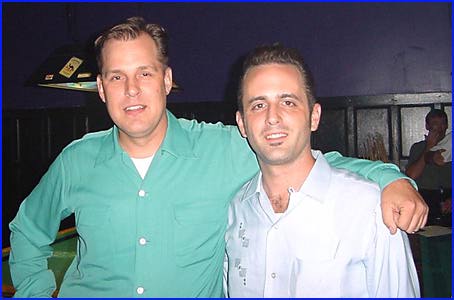 LONEY CHARLES, LEFT, AND RUDY VARNER, LONEY AND RUDY
ARE THE RHYTHM SECTION FOR TWO BANDS:
JACK SCOTT'S TOP RANKS AND THE HI-Q'S.
RUDY IS WEBMASTER FOR PLANET ROCKABILLY. 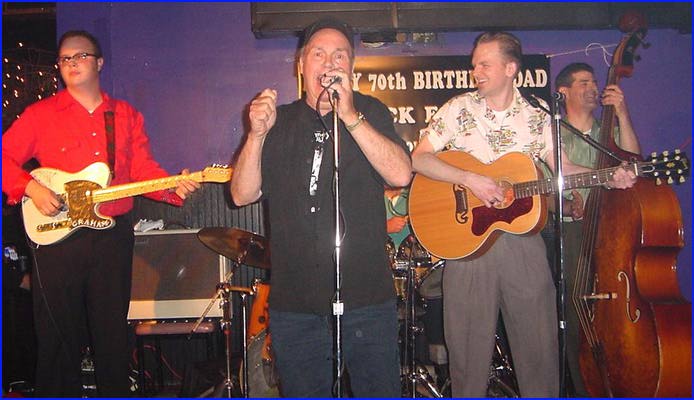 JACK EARLS TREATS THE CROWD TO SOME OF HIS HITS. 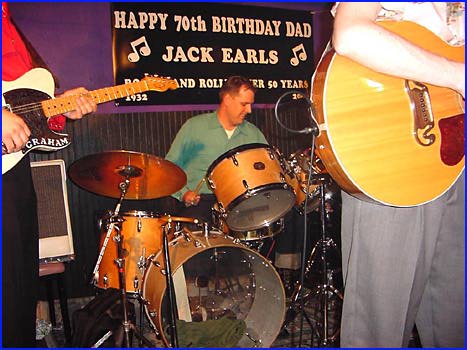 LONEY CHARLES DROPS IN FOR DRUM DUTY DURING JACK'S SET.

Afterwards, several guests appeared on stage with Bones Maki & the Sun Dodgers: Lisa Earls, Jack's daughter, proved her possession of Jack's genes by doing great vocal renditions of major rockabilly classics. Since I have seen Lisa perform prior to this event, I can attest that she was in her usual good form. For a change of pace from writing and emceeing for the Rockabilly Hall of Fame, yours truly, the "Rock and Roll Realtor", joined Bones Maki & the Sun Dodgers for a couple of rockin' songs. Also appearing during the second set was "Saxy" Dave from the Beer Drinkin' Gypsies. 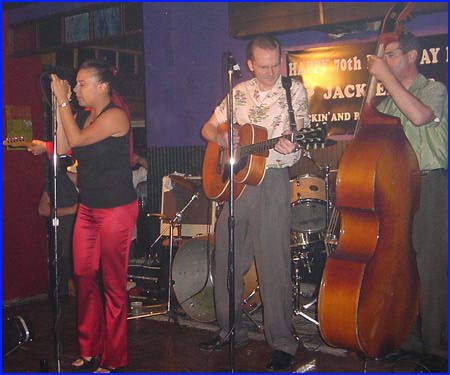 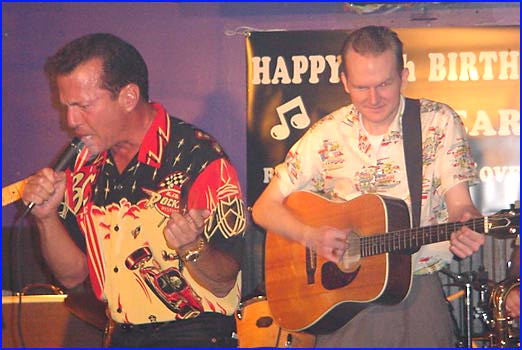 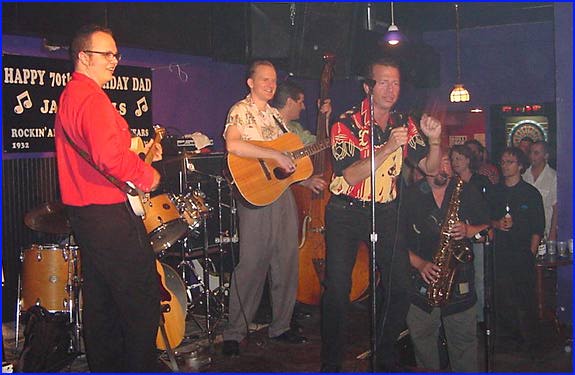 THAT'S "SAXY" DAVE FROM THE BEER DRINKIN' GYPSIES ON SAXAPHONE. 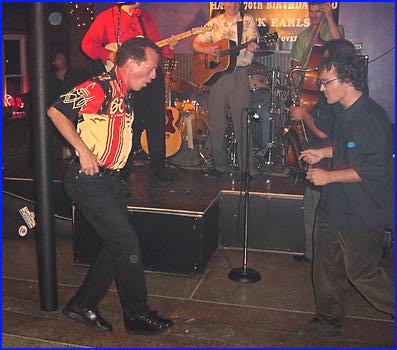 DURING ONE OF THE GUITAR SOLOS ON "BLUE SUEDE SHOES",
BARRY DOES THE BOP WITH PETE EARLS, JACK'S GRANDSON
(PETE'S FATHER, JACKIE JR., PLAYED DRUMS ON THIS SET).

The Silvertones, a "Westernbilly" group from Windsor, Ontario, Canada, whom I've had the pleasure of introducing twice at the Rockabilly Hall of Fame Stage at Viva Las Vegas V, put on another swell set to "top off" Jack Earls' great birthday bash.

THE SILVERTONES FROM WINDSOR, ONTARIO, CANADA, DID A GREAT SET,
INCLUDING A SONG BY A FELLOW CANUCK, THE SINGING RANGER, HANK SNOW. 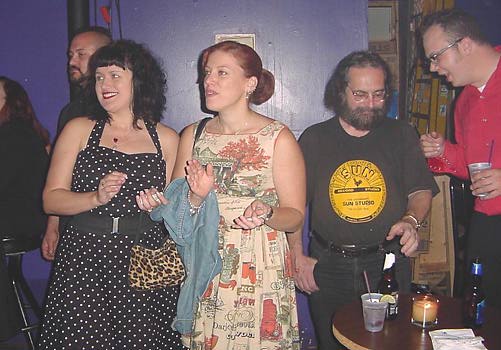 THE SILVERTONES DID "SARA JANE", AND HERE'S SARA JANE!
(THE REDHEADED LADY)

Another "tip of the hat" of gratitude to Craig "Bones" Maki for helping Lisa Earls organize, promote and handle the musical arrangements for this special party for a very special person.

Editor's Note: Barry Klein writes for the Rockabilly Hall of Fame, and his book, "Sex, Drugs and Rock & Roll", was published in 1997. To contact Barry, email him at bmk@bmkre.com