SNAPSHOTS FROM
THE LOST HIGHWAY -
HANK WILLIAMS
Colin Escott and Kira Florita Just when you thought you'd seen and heard everything there was on Hank Williams, along comes this glorious two-hundred page book of letters, forgotten songs and over three-hundred photos, many of them new. The book came about when Colin Escott and Kira Florita were compiling The Complete Hank Williams box set and found a wealth of unpublished photos that they weren't able to use in the box sets accompanying booklet. Around the same time, country singer and dedicated historian Marty Stuart had acquired a stash of memorabilia and unseen photographs from Hank's sister, Irene. The result is this fascinating document which serves as an essential companion to the box set and Escott's 1994 book, Hank Williams: The Biography.

The book starts with an intelligent forward from Rick Bragg who tries to explain the wide range of people who have been affected by his music. He also describes a so called new country singer "in a big hat" that he'd endured before an Allison Krauss concert - "I guess some people would say it is country for the new world, the new age, but it is not country at all - it is pop music in snap pearl buttons, and it should be more than that. Marty Stuart describes the meeting with Irene Williams and his overwhelming joy at the situation is obvious. He asks that the very personal items contained within the book be approached "with respect. Public property has feelings too".

The Hank Williams story is told chronically through quotes from friends, fellow musicians and family members from a variety of sources. The text borrowed from his mother's 1953 publication, Life Story Of Our Hank Williams - The Drifting Cowboy is fascinating in that it tells the story that most fans would first have become familiar with, whereas the quotes from band members in the '90s are closer to the vein of reality and aren't seen through the same rose-tinted glasses. The combination of the two styles gives the book an amusing edge.

For me the real highlights of the book are the original letters from his mentor Fred Rose, whose advise about women in general and Miss Audrey in particular is brilliant. He warns Hank not to let "Audrey pull the wool over your eyes by making you jealous. That is the first weapon a woman uses on a man she loves. These women want to be scalp collectors and see how many men's lives they can wreck, but they can always be crossed by a man who uses common sense". That ruled Hank out then. A month after that letter he wrote to Hank again, this time berating him for phoning Rose when he was drunk. Rose himself was a former alcoholic and was keen to use his own experiences to help his protégée. He signs off by pleading "Please don't phone me when you are drinking as it only makes me feel I'm being let down by a guy I felt would never let me down. Think it over and read this letter when you are sober and you'll see that I'm trying to help you find yourself. I am."

Some of the photos are a revelation, showing him on stage, relaxing at home, with fans and fellow performers. There's the only known photos of him in the studio, where he poses with a couple of fans from Kansas and a classic one where Hank and Sammy Pruett smile whilst Grady Martin lights a cigarette with a fiddle in his hands. On page 88 there's a brilliant between-song shot of Hank and the band on stage at a packed outdoor concert.

The photos from the funeral are again very revealing and show the effect his death had his family and friends. The text here is also compelling. The most bizarre photos are of second wife Billie Jean leaning over Hank's face as he lay in his casket, and one of a crazy looking Miss Audrey at a party with Jerry Lee Lewis and his sister Linda Gail, from what looks about 1968.

If all that isn't enough, there's the lyrics to twenty-nine unpublished songs ranging from The Broken Marriage to Honkey Tonkin' Mama. I would imagine a few enterprising singers will add music to some of these, and why not. Hank was a prolific writer and according to Big Bill Lister "his billfold was so thick 'cause it was stuffed full of bits and pieces of ideas for songs". DJ Bob McKinnon tells a great tale about the events surrounding the writing of Kaw-Liga as does musician Leabourne Eads about how Hank came up with I Saw The Light. The book even includes the fragments of a song Hank was writing on that fateful last ride.

I can't recommend this book enough, it's a really well crafted document, that lovingly celebrates the life of the king of country music and the granddaddy of rock 'n' roll.

HANK WILLIAMS
and the DRIFTING COWBOYS 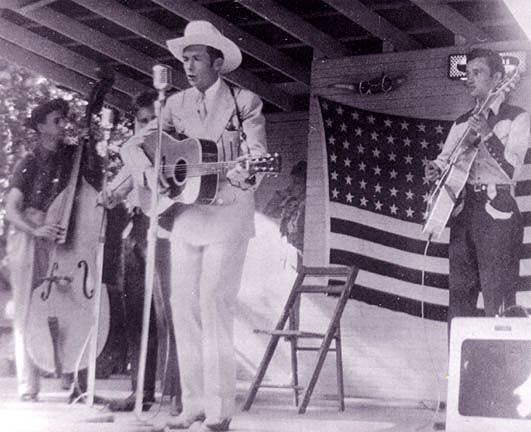 The year had been the most successful in his stormy career, with jukeboxes weeping and rocking across the country to top Ten favourites, Dear John, I Can't Help It, Howlin' At The Moon, Crazy Heart, Lonesome Whistle, Baby We' re Really In Love and the two number 1 smashes, Cold, Cold Heart and Hey, Good Lookin'. It wasn't ending on much of a high though, his volatile marriage to Miss Audrey was in it's final, fighting days and his chronic back condition was now so bad that two days after the session, Hank would be under the surgeons knife in a Nashville hospital. The pain was so bad he could barely throw a chair at Audrey!

The session was his sixth of the year, and with his suicidal cocktail of drinking binges and a heavy touring schedule, it meant that nothing new had been penned for the date. He was left with no alternative than to return to some of his older material. I'm Sorry For You My Friend was supposedly written for kindred spirit Lefty Frizzell and featured typical Drifting Cowboys backing. Hank preaches about the virtues of lying to your partner, and comes over as the perfect husband as Don Helms underpins the lyrics with an aching solo.

"I left my home out on the rural route, and told my baby I was going steppin' out" has all the hallmarks of a classic honky tonker, and Honky Tonk Blues is one of Hank's finest (but to be absolutely perfect, it could have done with a Pruett solo). This was his third crack at a song that he'd initially tried over four years before. Whatever the reasons that Fred Rose had been unimpressed before, he didn't need any more convincing this time, and when MGM released it a couple of months later, it rose to number 2 on the country charts. 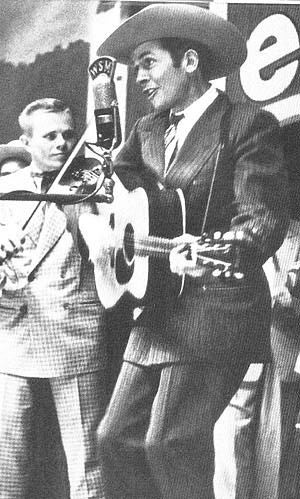 Let's Turn Back The Years had first appeared in one of Hank's WSFA songbooks in 1946, but if the lyrics, pleading for a re-conciliation, meant anything at the time, they certainly didn't by 1951. Whatever he was calling her now, it wasn't honey!

After the session ended at mid-day, and the group walked out into the cool Nashville afternoon, they probably didn't realise that it was the end of an era. Hank's operation hadn't been a success and forced him to disband the group temporarily, with intentions of calling them back when he was able to get back on the road. By the time he was ready, Sammy Pruett had joined the ranks of Carl Smith's Tunesmiths, no doubt disillusioned by the lack of space his guitar was commanding in the Williams sound. Of the three sessions that Hank made in 1952, Helms was present at all of them and Rivers at the first two.

The magical sounds of Hank Williams and the Drifting Cowboys had been silenced, and anyway, Hank knew he'd never get out of this world alive. He was getting close to the end of his lost highway, and there wasn't even a band to join him in the powder blue Cadillac. The man in the white hat was dying, but the legacy was living - and still is.