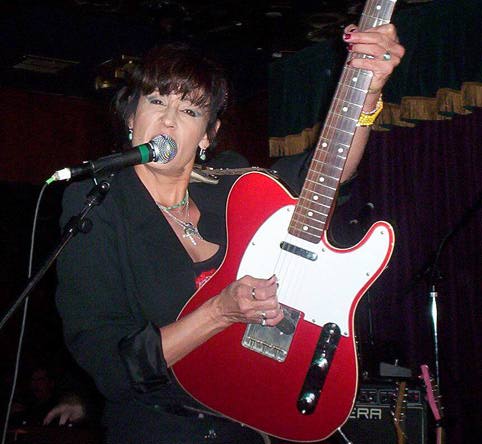 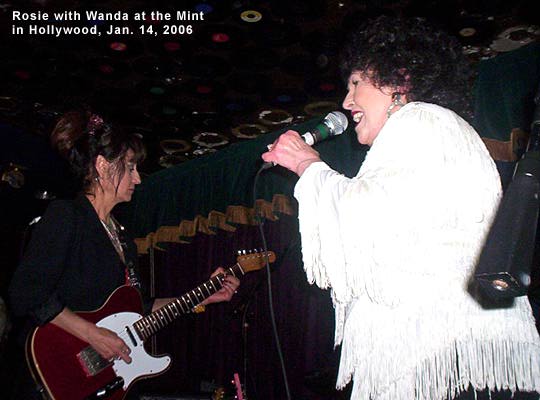 JANUARY, 2006: Rosie has hinted to the Rockabilly Hall of Fame that she may be spending more time in California in the near future ... doing local shows and concentrating more on using some of her other talents to teach guitar, give voice lessons and spend more time with her art.

Since the mid-1980's Rosie Flores has been a key figure on the alternative country music scene. During that time she has released five solo albums and three country music videos, and has continually toured the U.S. and Europe. Rosie's unsurpassed talent as a singer, songwriter and guitar player, has earned her the respect and love of her colleagues and adoring fans the world over.

Born in San Antonio, Texas, Flores grew up listening to regional radio stations and watching Dick Clark's legendary rock'n'roll televison show American Bandstand. She cites Elvis Presley and Brenda Lee as her earliest musical influences. Rosie began her recording career at age seven, when her father engineered a two-track recording of her singing at home with her brother and sister. One of these childhood recordings ended up on her Hightone release, Rockabilly Filly.

At age 12, Flores' family moved to San Diego, California, where she was exposed to a whole new world of music, including surf, blues and Southern California country rock. Four years later she formed her first band, an all female group, that provided the fledgling songwriter an opportunity to combine her varied influences into her own coherent musical vision. By 1985, Flores was well known and widely respected on the Southern California music circuit. As the leader of Rosie and The Screamers, Flores designed a repertoire of hard-driving country, classic rockabilly and her own originals, foreshadowing the emergence and widespread acceptance of these forms of music.

In 1987, she officially debuted as a solo artist when Warner Brothers/Reprise released Rosie Flores, which was produced by Pete Anderson (Dwight Yoakam's guitarist and producer). The album had an immediate impact on critics. In one of many glowing reviews, Entertainment magazine exclaimed, "Flores never forgets that she's a poet and a rocker with a pure country heart." Subsequent raves in regional and national press included People, No Depression, Details and the New York Times.

The following year Flores relocated to Austin where she immediately became an integral part of the local music scene. Hew Austin band included Junior Brown on steel guitar and Terry McBride (McBride and the Ride) on bass. She appeared on the prestigious PBS show Austin City Limits and began writing songs with Jimmie Dale Gilmore and performing with Texas heroes Joe and Butch Hancock.

In 1992, Flores found a new home for her boundary-crossing style at Hightone Records, releasing her second solo project, After the Farm, co-produced by Greg Liesz and Dusty Wakeman. The album put Flores on both Pulse and Request magazines, top Ten year end lists. In addition, the song "Dent In My Heart," co-written with Jimme Dale Gilmore, was chosen for two movie soundtracks. Her ascendance as a lead guitarist prompted profiles in Musician, Guitar Player and Guitar World.

Over the next several years, Flores continued to write, perform and record with a variety of artists in the country and rock fields. She did duets with artists such as Freddy Fender and the Texas Tornadoes, Marshall Crenshaw and Joe Ely.

Rosie's 1993 recording Once More with Feeling, again co-produced by Liesz and Wakeman, caught the ear of country star Pam Tillis, who asked Rosie to join Wanda Jackson and Iris Dement as her featured guests on the TNN special, Live at the Ryman. Before the year ended Flores' video of "Honky Tonk Moon" was in rotation on CMT and VHI.

In March of 1999 Rounder Records released Dance Hall Dreams, which spent two weeks in the #1 position on the Gavin Americana charts and garnered rave reviews from People magazine, "...shows why she's such a favorite with the dance-hall and jukebox crowd." Entertainment Weekly, "Flores can always be counted on to deliver a set brimming with originality" and the Los Angeles Times, "...solid outing... she rocks and swings like crazy." In June, shortly after moving to Nashville, she won the 1999 L.A. Weekly Music Awards for Best Country Artist.

For up to the minute information on whirlwind Rosie and her forthcoming tour dates check out her website at www.rosieflores.com