Posted March, 2017 - Submitted by anglares.dominique@wanadoo.fr
Texarkana's Regional Music Heritage Center has decided to add our friend Pat Cupp and the "Flying Saucers" to the Walk of Fame. They will put a plaque on the "Walk of Fame" at The Arkansas Municipal Auditorium. It's an overdue honor for that great rock-a-billy cat. Pat will be a honored guest for all events of 31 March to 2 April 2017 as they celebrate the Scott Joplin Centennial in Texarkana. You beat them flat inducting Pat into the Rockabilly Hall of Fame under #128 around the same time than Lew Williams, Fluke Holland and Joe Penny.
It's interesting to note about Pat's session for RPM being set on May 13, 1956 at Shreveport's KWKH radio by night when the station went off air. The sound engineer was Bob Sullivan and six songs were cut including the all-time classics "Long Gone Daddy", "Do Me No Wrong" and "I Guess It's Meant That Way". After the session, Pat was asked what he would call his band. Pat laughed and said that he wanted to call them "The Flying Saucers". At first the guys in the band thought it was a joke, but then realized that Pat was serious. So, "The Flying Saucers" were born and ready to take off. Except Pat, there's only one band member still alive. It is Pete Waller who played bass. Pat's mother Ruth passed away at 53 years old. Pat states she had more talent than all of them put together. She was co-writer on most of his songs.
I am very proud to be called a friend by Pat and his lovely wife Gaye.
Dominique

These photos were posted February 2, 2003

"Pictures taken when we did a gig for The Texarkana Regional Arts Councile,
Inc on Rockabilly Music. Darin Cupp (my oldest son) on Bass, Dave Daily on
Drums and your's truly on Guitar and doing all the talking and singing ..." 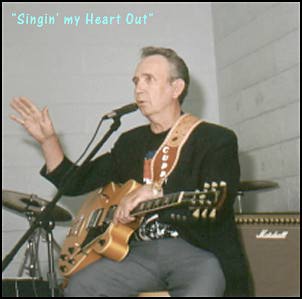 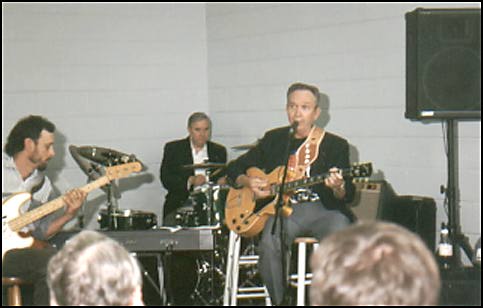 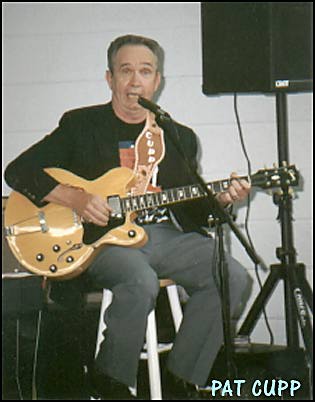 
"HERE ARE A COUPLE OF PICTURES AND A COPY OF THE LETTER that the Governor of Arkansas, Mike Huckabee, gave to me in recognition of my Induction into the Internet Rockabilly Hall of Fame. This recognition from both the RHOF and the Governor of Arkansas has made all those years of playing and creating music worth the effort. These two unexpected honors have more than over shadowed some of the disappointments I have endured in my music career. Of course, I realize that none of this could have happened if it were not for the great fans of the Rockabilly World who have insisted on keeping the early days of a "changing music era" alive and paying homage to those who helped create it. I sincerely thank the Rockabilly Hall of Fame, the Governor of Arkansas, and all the great Rockabilly Fans."

PAT CUPP SPEAKS: I was raised in a musical family. My dad was Burton Cupp and was a drummer. My mother, Ruth, was a piano player. I have two brothers, Skippy and Mickey, who both play piano. My sister Ruth (Bea, nick name), sings. I also did vocals and played guitar. My dad taught me to play the tenor guitar (4 strings) which I also used to do tenor banjo Dixieland style. I was playing music of the thirties when I was five years old. I got my first six (6) string guitar when I was eleven years old after playing a stage show in Dierks, Arkansas. I made six dollars and my dad gave me the rest so I could purchase a guitar which cost fifteen dollars. It took a while for my hands to grow large enough to handle the base strings, but within the next two years I managed to learn. My brother, Skippy had a friend, Billy Jo Graves, who played guitar and I watched him make chords using the base strings. My first guitar was not amplified and was used for rhythm only. I used this guitar until I was 18 years old and began recording. I bought a new guitar just before I signed my recording contract with RPM Records.

I signed my Record Contract in May 1956. I appeared on stage shows with Elvis Presley, Johnny Cash, Carl Perkins, Roy Orbison, George Jones, Johnny Horton, Johnny Carroll, Tommy Sands, Jim Ed and Maxine Brown and a host of others.

I joined the U.S. Air Force in March 1957 and spent 4 years. I played music most every night of my military service time. I was married to my high school sweetheart, Loretta Gaye Mitchell, February 7, 1958. We have a family consisting of one girl, Renee' and two boys, Darrin and Scott.

I continued my music as a hobby since my marriage. I played guitar and did vocals with a band I was with for 35 years. The band was called the "Variables" and we played all types of music from 40's Rock to Modern Jazz. The "Variables" consisted of Bob Cargile, piano, Jimmy Allen, bass, Bill Manning, drums, Pat Cupp, guitar and vocals. We recorded on our own record label "Chance" in 1967. The names of the songs that were recorded were, "After All" and "New World".

During my career, I appeared as an extra, in a 1976 movie film named "The Town that Dreaded Sundown" starring Ben Johnson and Andy Prine. I appeared in the film as a police officer. The story was a true story of several murders which happened in Texarkana during the late 1940's. I happened into this movie by chance. I was watching the filming and was asked if I would put on a police uniform and be part of a scene. The director wanted an older person to play the police officer in this particular scene. (most of the men, extras, in police uniform were in their 20's) After I played this scene, I was asked to hang around and do other scenes. My name does not appear in the credits, but I appear in many scenes of this movie. (I didn't get paid anything).

I did a guest appearance at Hemsby, England (Hemsby 15) in October 1995. This appearance was my last stage show before retiring. I have been forced into retirement due to a hearing problem which has been on-going since 1988. I have lost 90% of my hearing which has made music almost impossible.

I'm a Long Gone Daddy; The Music of Pat Cupp

In the early fifties, Bill Haley and the Comets fueled the success of rock and roll. Inspired by Haley, there were many kinds of rock, one being a combination of "rock" and "hillbilly" music typically found in the ArkLaTex and parts of Tennessee. The term Rockabilly easily described twangy electric guitars, heavy drums, and vocal sounds enhanced by all types of inflections and body movement. A stepping stone to rock and roll, Rockabilly pulsed across America between 1954 and 1957.

Elvis Presley comes to mind when we think of rock and roll and Rockabilly. His singing style, stage presence, and marketing escalated him to the top of the charts and the mountain of this new music. Of course there were many others: Jerry Lee Lewis, Buddy Holly, Carl Perkins, Roy Orbison. The first two were "shouters;" the second pair were guitarists and singers in the Elvis mold. Perkins, along with Elvis made their marks in Texarkana at the Arkansas side municipal auditorium and the Louisiana Hayride in Shreveport.

Pat Cupp grew up in Nashville, Arkansas. His home was a musical environment in which his father Burton played ukelele and drums, and mother Ruth played the piano. His brothers Skippy and Mickey, and sister Bea also played music. Pat's part in the musical family was that of singer and guitarist. When the family moved to Magnolia, Arkansas, Ruth Cupp had a radio program on KVMA. Twelve-year-old Pat followed her with his own one hour broadcast.

By 1953, the Cupp family was living in Texarkana where music was always popular with its residents. Pat formed a Rockabilly group, consisting of lead and rhythm guitar, piano, bass, and drums. The name of the group played on Pat's last name, Cupp: Pat Cupp and the Flying Saucers. On Pat's first performance, however, he was not joined by his band. Opening for Johnny Cash and Carl Perkins, Perkins played lead guitar for Pat, with Cash's bass player.

Pat Cupp and the Flying Saucers made their first recordings in 1956 at the Radio Ranch - KWKH - in Shreveport. The group recorded tunes written by Pat, including: "Do Me No Wrong," "Baby Come Back," and "Long Gone Daddy." This last tune is most remembered by Rockabilly fans in the United States and overseas.

Pat participated in the "Elvis Experience" in a memorable way. According to Pat, he and Dr. Carl "Cheesie" Nelson, now President of Texarkana College, were asked by a frantic promoter to fill in for Presley whose car had broken down. Could Pat and Cheesie Nelson play until Elvis arrived? Pat played; "cheesie" did his perfected impersonation of Elvis for 30 minutes. Elvis arrived in time to listen to Pat and "Cheesie." At the end of the performance, Presley came onto the stage to thank the men before the audience. It would not be their last meeting.

Many think that the end of the 1950s became a dead time for the rock music movement. Gimmic songs like "Purple People Eaters," is a good example of how the music ebbed and flowed. Some rock groups incorporated a lot of movement, such as the kick and body scoop, with honking saxophones. It was this activity that caused Pat Cupp to leave the Rockabilly world. He served the United States as a musician in the U.S. Air Force from 1957 - 1961. When he was discharged, Pat Cupp came home to Texarkana, married, raised a family, and worked as an engineer at Lone Star Ammunition Depot, where he is employed today.

While continuing a musical career became secondary to raising a family, Pat never abandoned the music. He became interested in playing pop and jazz. We welcomed him into our group The Blue Notes. Pat's singing and guitar added a new dimension to the group. It made me realize how important his instrument and lyrics had become to the changing world of dance music. Soon Pat became a part of the band that played at the Embers Restaurant.

Europe - especially the United Kingdom - and Japan have always shown great interest in American made music. Jazz is popular; Rockabilly is worshiped. There are societies and clubs that meet regularly to enjoy the best artists of that time period. They have conventions and festivals to celebrate the unique heritage of this music. Pat never realized what his early songs would bring him many years later. For now he is considered an authentic, first generation Rockabilly artist of that 1954-1957 period - maybe the only one who had seven single record titles.

The life and legend of Pat Cupp was recently celebrated at a worldwide gathering in Hemsby, England, 150 miles north of London. His old records were remade into CD's, old photographs were reprinted, and the recovery of a man's fame, never expected in his most "far out" fantasy, was made. According to Pat, "I finally was a star."

Recognized as a first generation performer and music legend, Pat Cupp will surely return to Hemsby. It is a heritage worth celebrating in the United States. Indeed, the paraphrase one of Pat Cupp's songs, welcome home, Long Gone Daddy.

May 8th - Jim LeFan and Pat met Joe Bikari at the Texarkana airport (Tuesday morning 9:30). That Tuesday evening Pat had dinner with Jim and Joe Bihari at "The Chef." Tuesday Night there was a reheasal at Kosy.