Marvin Rainwater's star rose on the the launching pad of Arthur Godfrey's talent scout show in 1955. Four years as a regular on Red Foley's Ozark Jubilee as well as shows such as Ed Sullivan, Dick Clark, Porter Wagoner and Sunday Night at the Palladium in London insures recognition wherever he goes. He looks and sounds as if he had stepped out of one of Jack London's adventure stories.

He is a big man with craggy good looks of his Cherokee ancestors. The songs he sings range from lusty to just plain touching. Several years in the entertainment field, from honky-tonk bars to TV and the London Palladium has given Rainwater a backlog of stories and anecdotes that are highly entertaining.


He's appeared on Ed Sullivan's Sunday night saga, was featured on Dick Clark's network TV offering and was a regular on Red Foley's Ozark Jubilee for four years. Marvin's rugged brand of musical feeling stems from a deep desire to communicate the meaning of a song, rather than exercise the simple process of hitting notes and reciting lyrics.

This attitude is also evident in his approach to the songs he writes. The words are symbolic of a definite feeling and the music matches the mood. His "Whole Lotta Woman" was number one in England for six weeks, and a big hit throughout Europe and Africa for an even longer time. One of his best known numbers is "Gonna Find Me A Bluebird." This still brings a rousing round of applause from the audience wherever he sings it.

Versatility is Marvin's middle name. He has played in parks on stages, at County and State fairs, in dance halls, conventions and night clubs from coast to coast. The ability to adapt to the moods of an audience, is in many cases, the difference between a Happy Crowd and a Bored Crowd. The constant desire to please people coupled with his consistent ability to draw crowds is the reason Marvin Rainwater continually makes money for promoters around the world.

Besides his own hits such as "Bluebird", "Whole Lotta Woman", "Running Bear", "Half Breed," Moaning The Blues", "My Brand Of Blues," "The Albino", Pink Eyed Stallion," Henryetta, and City of Angels," Marvin has written many best selling songs for other artists such as "Be Good To Her", for Carl Smith, "Gonna Find Me A Bluebird."

Marvin's song "Whole Lotta Woman" was sung by Vanessa Redgrave in the Academy Award Winning Movie "Georgie Girl." He also penned the hit "I Miss You Already" for Faron Young and Billy Joe Royal has currently taken that same song into the Billboard Charts for over 28 exciting weeks!

Marvin with fans from northern Wisconsin 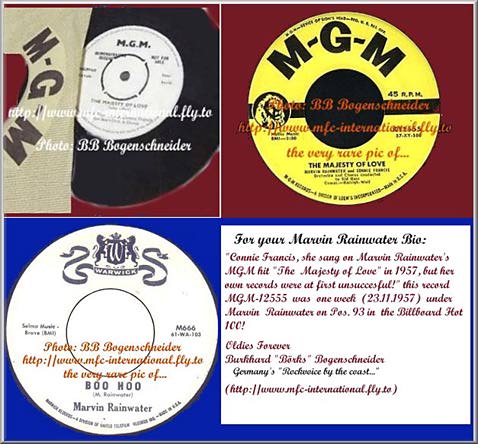