Linda Gail Lewis Rocks the Jocks
Modern rock n roll queen Ms Linda Gail Lewis recently added another Celtic country to her growing fandom base when she dazzled audiences at two stunning concerts in the West of Scotland. Brought over by local resident of Girvan, long time family friend and now rock n roll promoter, Des Johnston, she created quite a stir in the local media with local papers, local radio and especially Scotland's largest daily newspaper The Daily Record giving her a huge two page spread. Little wonder that the demands for tickets far exceeded the seating capacity at both venues, Stranraer Rugby Club and the Crosshill Inn.
Four former members of local rockabilly legends the Black Eyed Peas got together again as the Peas to back her and to open both nights. The hard rocking four piece played many crowd pleasing favourites from the greats and a few more obscure numbers for the more discerning punter. Vocals were shared between the guys and they zipped through Rock Around With Olive Vee, Mystery Train,Tear It Up,Somethin' Else and Rockabilly Boogie (which mentioned Memphis' Hernando's Hideaway to Linda Gail's delight). Stand out numbers for me were Pink & Black, Don't, Apache (a fine contrast) and a snatch of Old Shep before ripping into a frantic Hound Dog. Always hard to please a home town crowd but the country folks really did have a jamboree to the Peas Rock N Roll Music. Both nights, the dancing crowds had the boys pumped up to back the star of the evening.
Over two nights she did nearly 60 songs and sold a truck load of her latest cd Lie & Deny ( which is real gem, featuring guitar legend Albert Lee on a few tracks). In Crosshill she was even lead to the stage by a Scottish piper in full rig out,this had the crowd on its feet even before she sang a note. Romping through the appropriate Boogie Woogie Country Girl she hollered to the band ădon't quit when it's that goodä in an extended opener.
We visited Mr Beethoven, Rattled and Rolled, Miss Mollied, Bopped the Blues and slowed it down with big bro's treatment of Hank's classic, You Win Again. On both nights the country songs, the modern songs from the new album and the roadhouse rockers all went down a proverbial storm. Great to hear a piano stomping version of All Shook Up.The band were working their sporrans off to keep the big beat a flowin' like malt whisky from the local stills. The drummer certainly earned an extra bowl of porridge for supper, particularly in a wild High School Confidential with the great ămotha-humpin ' bluesä line. Great ad- libs in Shakin about JLL coming home with the first big pay cheque from Sun and a Fleetwood Cadillac for the family!!! Glory Days indeed.
From the new album, we had Irma Thomas' ironic You Can Have My Husband, But Please Don't Mess With My Man, Sun gem Let's Talk About Us, Fat's mid tempo groover, Wait And See, the stellar I Wish This Car Was A Train and Smokey Joe's. Even for us hardened LGLophiles there were surprises, One Night, Where Could I Go But To The Lord, Old Black Joe, Cottonfields, Wild One and a dazzling Will You Still Love Me Tomorrow which had all the men dragged out for some sultry dance floor smooching (she must record this soon). A particularly intense Old Black Joe dragged members of rockabilly band Hi-voltage up on their chairs to holler out the refrain in true Southern style, they probably woke up Stephen Foster in his US grave!!!
A wild Wicked Wanda styled Let's Have A Party, a frantic stuttering R-R-R-R-Rip It Up, we Ducked Back In The Alley and Go Johnny Go'ed all night. The late, and VERY great, Mack Vickery's anthemic Rockin My Life Away sttod out by a country furlong (a very long version which nearly finished me off permanently on the dance floor) and a stunning What'D I Say pts I & 2 with part 2 being word for word the JLL version (from the classic Smash lp By Request live album), heavy breathing and cars parked on dark levees had many elderly gentlefolk loosening collars as this raunchy vixen turned up the heat with devil's music abandon.
Mind you, in true Ferriday tradition we also got some cool country in Jambalaya, Together Again, I Can't Stop Lovin You, Crazy Arms and ,after midnight on the Sunday, Amazing Grace followed by a revival Sun styled When The Saints Go Marching In, that probably had the patron saint of Scotland St Andrew thinking there was a fire n brimstone revival down in the glens of Crosshill! I think the whole village was packed into the place.
Two magnificent nights, hearty congratulations to DJ Promotions (hopefully this will spark off further rocking nights), the willing and able to rock n roll all night Peas and Ms lucious Linda Gail who impressed all with the range of her vocal ability mastering all styles in the family tradition, the stunning hard rocking piano work, the dexterous pr skills at handling an audience and delighting everyone afterwards who wanted to meet her.
People will talk of these dazzling nights in SW Scotland for years to come. She has created a big splash in the land of lochs and the rocking ripples will be felt for many a long day.
Och will ye no' come back again hen?
Phil Davies
March 2005
ps sorry about the rugby scores boyos ;-)) 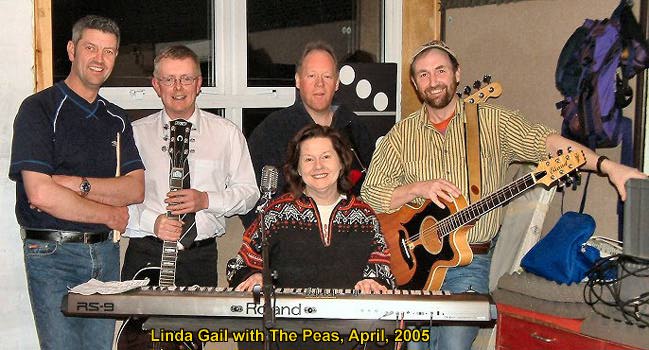