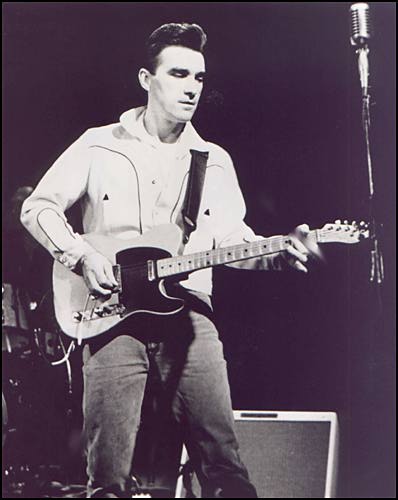 Barry: Everybody knows Eddie Angel's affiliation with the group, The Planet Rockers. He's a great guitarist and plays with Sonny George, who handles most of the vocals. Eddie's also a songwriter and producer. He has had surf bands and has played with Link Wray.

Tell us about your early childhood. Where were you born? How did you get involved in music?

Eddie: I was born and grew up in Albany, New York. I had two older sisters who played rock and roll records around the house all the time, so I heard Elvis and Chuck Berry, and all kinds of stuff. So I started playing guitar when I was 12, and at that time the Beatles were out and I was a big Beatles' fan, as every kid who was 12 years old was. So that's how I think I got started and what made me want to play in a band.


Barry: You started playing guitar initially. That was your first instrument?
Eddie: Yeah! We are not counting clarinet, right?

Barry: No.I flunked out at violin.
Eddie: I have a funny story. When I was in the fifth grade - that was like when they tested kids to see if they could be in a band, to see if you had any musical aptitude because they didn't have enough instruments for everybody. So I flunked the musical aptitude test. That's why I play rock and roll.

Barry: So right after the Beatles you started playing guitar?
Eddie: Yeah. So my style is based around George Harrison, but through him Carl Perkins and Chuck Berry. I just kind of never left that track. When all the other guitar players started coming out like Hendrix and Jimmy Page, I just couldn't play like that. My brain wasn't wired that way or something. My brain was wired to play like Chuck Berry and Carl Perkins. That's all I have done through the years, and I've just made a living from it.

Barry: It's interesting because most of what I write appears in and is read by rockabilly people through the Rockabilly Hall of Fame. I'm on the rockabilly e-groups, and a lot of the people write demeaning things about the Beatles, not knowing that very early in their recording career they were doing Chuck Berry covers. If you buy the "Live at the BBC" double CD you see that back in '62 to '64 they were doing "Be-Bop-A-Lula", they were doing Chuck Berry, Little Richard, Johnny Burnette, Carl Perkins' "Sure To Fall". The first time I heard "Sure To Fall" was the Beatles singing it, then afterwards I realized it was a Carl Perkins' song. So was it hearing the Beatles and listening to them do some of the roots stuff that got you starting to listen to Carl Perkins himself? When did you start getting into the rockabilly stuff?
Eddie: Well like I said, I heard it all my life through my older sisters. My older sisters were teenagers in the ë50's, so I always heard it. I didn't hear that obscure stuff until 1980 when I joined Tex Rubinowitz and the Bad Boys in Washington, DC.

Barry: Was that your first professional job?
Eddie: No. I had been in other bands in the 70's. I was in a backup for the Star Bangled Washboard Band.

Barry: That was out of Albany?
Eddie: Yeah. That was out of Albany, but we toured the whole country. We played Chicago, Disney Land, CollegesÖbut 1980 with Tex Rubinowitz was the turning point because he was the first guy I met who really took rock and roll seriously. I could play Chuck Berry, but I thought everybody could do that. But come to find out, everybody can't do that.

Barry: Now Tex played the Baltimore/Washington area? Is that where he was from?
Eddie: Yeah. Washington, basically. That was a great rockabilly scene. You know 1980 it was Billy Hancock, Tex, Danny Gatton. I showed up in that scene, and it was like real fertile grounds to learn my trade as a rockabilly guitar player. But Tex was my first exposure to people like Charlie Feathers. After that I moved to Nashville and met an English guy named Mike Smyth, who still owns a record store there called Phonolux, and we put the Planet Rockers together and we went to England. Meeting all these English rockabilly guys was like going to finishing school or something.

Barry: Was Levi Dexter getting a name in England at that time, or was he already established?
Eddie: I don't know. This was already after him I think.

Barry: How did you hook up with Sonny George?
Eddie: Again, through Mike Smyth. His record store, Phonolux Records in Nashville. I was in a band in Nashville that got a record deal that got dropped, and I was ready to quit the music business. Mike was saying, "No. You can't quit." There is a guy who comes in the store whose name is Sonny George. He is real keen to start a band." So that is how we met. We put The Planet Rockers together and Mike was really instrumental in it. He let us listen to all of his records. He has one of the premiere rockabilly collections in the world. He gave us songs like "Spin My Wheels" which I would have never known where to get that record, and all kinds of stuff. So our repertoire came from Mike's record collection, basically. So that's what I mean when I say it was like rockabilly finishing school and the people he introduced me to like Barney Komis and the English guys. They are just - they just know their stuff. They are like archivists.

Barry: So you played steadily as The Planet Rockers with Sonny when they first came out or were you also doing other gigs?

Eddie: No. Just The Planet Rockers.
Barry: Chronologically, The Planet Rockers were from when to when?
Eddie: I think it was '89 to '92. Those were the main years. Then our bass player, Mike Winchester, got a gig with Emmylou Harris, and we couldn't find another upright bass player in Nashville that could play rockabilly, so we went our own ways at that point. But Sonny and I keep it together and we still do festivals and we record.

Barry: I saw you in Vegas - I think it was three years ago. That would have been '99, so you go back and forth. The exclusive relationship, let us say, between you and Sonny as The Planet Rockers ended on a constant basis in about '92?
Eddie: That's about right.

Barry: Also, a little bit about your career after '92. I know about Los Straightjackets, surf music and stuff like that. How did you get in to that? Was that still a product of your sisters'?
Eddie: I think when I first picked up the guitar the first song I learned was "Walk Don't Run". I started playing guitar in the mid-60's. The instrumentals were still on the radio.

Barry: The Ventures, Surfari's.
Eddie: Yeah. I had played guitar with the Ventures, that really helped me learn a new guitar. That was in me. I always played instrumentals. Even in Tex Rubinowitz's band we would do 3 or 4 Link Wray songs and from then on I was always playing instrumentals.

Barry: You know, Sleepy LaBeef in his set yesterday did "Rawhide", my favorite Link Wray instrumental. I've seen Sleepy do a lot of things, but I never heard him do a Link Wray guitar solo before.
Eddie: That's pretty good. I bet I've played "Rawhide" more times than Link Wray!

Barry: We were talking before the tape started that last Saturday I was having breakfast and I'm watching the credits of a movie on HBO, and there I see "performed by Eddie Angel of Los Straightjackets." How many soundtracks have you appeared on?
Eddie: You know, I don't know the number, but it's enough that it keeps me in business as far as making a living playing music. There has been "Harry the Spy", "Bats", "Meet the Parents", TV shows like "Melrose Place", "Sex and the City". There have been at least a dozen - a Miller's Beer commercial.

Barry: I know there's still a great demand for The Planet Rockers, so if the opportunity presents itself, you and Sonny get together, get the band and perform - so what other venues or bands are you playing in now.
Eddie: I've got a 60's garage band called the Neanderthals and we go to Europe a couple of times a year. We dress up like cavemen, in Flintstone outfits. We have a new CD coming out this year called "Shut Down 2002 BC", and it's all hot rod songs.

Barry: What's the label on that.
Eddie: Spinout Records. That's my own label. But it will also be released in Europe on Munster. 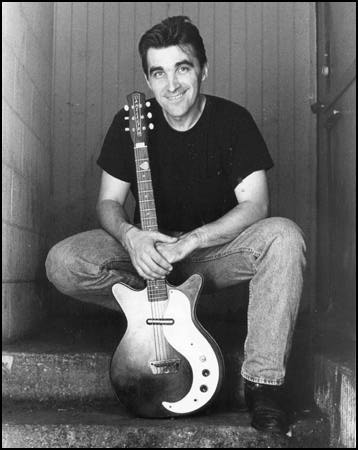 Barry: We are now in July of 2002. What do we know about future Eddie Angel appearances for the rest of the year.
Eddie: Well, The Planet Rockers are doing a festival in Barcelona in September. We're doing a festival in Australia in October. In between that I'll be doing Los Straightjacket tours. I try to do as much as I can.

Barry: Is there a web site or something where people can get the information?
Eddie: Los Straightjackets would be www.straitjackets.com/index.html and my own web site is www.spinoutmusic.com.

Barry: Those are two ways that the fans can find out more about you, the products, where you are playing, the CD purchases and that type of stuff. I'll be reviewing the new Planet Rockers' CD in my next record review column www.rockabillyhall.com/barrygbcdreviews.html. I want to thank you for taking the time and getting better acquainted with you. I hope all your fans enjoy hearing about this.

Eddie: Thanks man. It has been a great time.