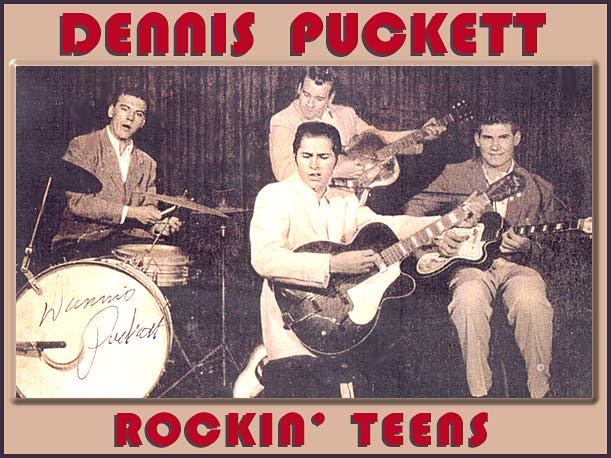 Noting Presley's influence on so many of the rockabillies one could say Dennis Puckett, with looks, sound and his eagerness to have a good time exemplifies what a true rocker was and should continue to be about - Let's Have Fun! 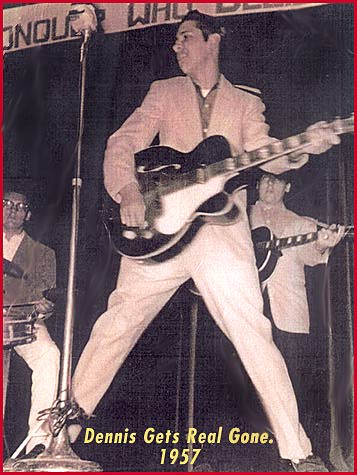 "
Besides parents, my family consisted of two brothers and one sister. My brothers and sister would sing all the time. We were always in singing contests as kids. My sister and her friend, who sounded like Doris Day, even got on the Ted Mack Amateur Hour TV show in Chicago. They didn't win first prize but did get gold watches and it was exciting for them.

My younger brother Roger and I used to sit around in our early years and harmonize like the Everly Brothers. Music ran throughout the family. I always ran around with older guys when I was in school because they always seems to be into music.

My school days weren't the best. I was like a rebel or black sheep. I did get into trouble and put on probation in the 8th grade. It was for minor things like drinking under age, etc.

My aunt Florence gave me my first guitar. It was a beautiful thing. The first song that I ever learned to play was 'Wildwood Flower.'


I was 16 years old when I first started recording and writing songs. The bathroom in my house had a good echo and that's what I used for my studio. That's were I wrote 'Rockin' Teens' and 'Teenage Girl'.

I was fortunate to have good musicians with me when I first started to record and play live shows. I had one player by the name of Junior Smith, a farm boy, He always chewed snuff and on stage would let it run down the side of his mouth. He could play like Chet Atkins and Merle Travis. He would hear a song and copy it and know it in no matter of time. He was an excellent player. His brother, Connie Smith, played steel guitar, banjo, guitar and piano.

I had a drummer by the name of Bob Van Houlton, He wound up with Roscoe and the Green Men. They all had green hair and played the Dick Clark show once.

My bass player was 'Goose' (real name Len Palmer). He was a rather silly guy - comic of the band. He had a fancy Lincoln that we used to ride around in. We didn't have room for all our instruments in the car so 'Goose' would cover his bass and tie it down on top of the car and off we'd go to a job.

I did get to see Elvis play back then in Fort Wayne. I remember him wearing that gold suit. We didn't have videos back then, so I would go and see all of his movies over and over again to get his movements down pat. I would copy them to the T for my stage act. My voice was higher back then so I could sing the key he sang in also.

I got to do show with Johnny Cash, Marty Robbins, Everly Brothers, Ferlin Husky and Sonny James to name a few. Marty Robbins liked me and gave me a plug on the Grand Ole Opry at one time.

I remember playeing with Johnny Cash. It was the time he was deep into drugs. When he got up to sing, he fell backwards on the stage and an ambulance had to take him away. We went out and did the show in his place (not that we could do Johnny Cash) but we gave it our best. I confronted Johnny on that occurrence years later but he had no recollection of what had happened.

I also got to play on the Alan Freed and the Big Beat Show. They had Buddy Holly, Jerry Lee Lewis, Chuck Berry, etc. Loads of giant stars were on this show. One night we went to see the show in Fort Wayne and one of the buses with the groups' instruments didn't show up. Dave Smith (my agent) wheeled and dealed for our appearance on the show by letting the other groups use our instruments. That was quite a thing for me back then ... I was in another world being able to get up with all those big names and play. 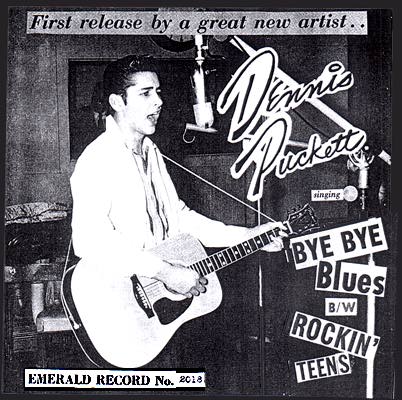 Cliff Ayers owned the label. I remember he re-modeled the garage behind his house to store the records in. He did a good job of it. My first recording session for him was done in Fort Wayne at one of the radio stations but I can't recall the name. I recorded 'Bye Bye Blues' and 'Rockin' Teens' at this radio station because Cliff didn't have one set up in his garage like some of the small record label guys.

I remember traveling around with Cliff when I got my first record out. We had this record route and he would put up a sign saying 'Indiana Elvis,' as I was known then and try to push my record. We would go into soda shops and such places and he would play my record while I pantomimed it in front of the kids. Anything to get the record moving! A real good friend of mine, Bib Severs from WOWO, played my record. It was a 50,000 watt station, so it was reaching out there pretty good. I was getting pretty popular around the area, but I never saw any money and I have no idea how many records sold. When you're a kid you're not into the money thing. You just want to get a record out because it's so exciting. A lot of the shows that we (me and the Rockets) played back then didn't pay anything.

Dave Smith (my agent) ran the Well Theatre in Fort Wayne and we would do some shows at the theatre for him. We got pretty good turnouts playing there. After I had my first record out, he held a 'Dennis Puckett Appreciation Day' in my hometown. The mayor and other dignitaries showed up. It was only one of the events that Dave Smith put together for me.

Later on, I recorded my second Emerald release at WOWO with Bob Severs. I did 'Teenage Girl' b/w 'Jungle Jive.' Cliff, being originally from New York with lots of experience in recording, could get a pretty good sound out of these little studios in Fort Wayne.

I remember the time my dad, brother Roger, myself and another guy headed down to Nashville. We went to see a disc jockey. while we were down there we went to this greasy spoon to eat some of that southern fried chicken and my dad, who was quite the talker, started to talk to this lady who owned the place. All of a sudden she's making a phone call and I'm on local TV in Nashville that very afternoon pantomiming my record. A guy by the name of Noel Ball had this record company and had group by the name of 'The Crescendos' who had a hit called 'Oh Julie.' He and his girlfriend liked the way I pantomimed, etc., and signed me to a contract. I got really excited and thought, 'Hey, this is it!'

We went back home and corresponded with him, but he said 'You have to come back and stay in Nashville.' I discovered that corresponding doesn't cut it. I also didn't really want to move to Nashville.

A little later on a lady got me on with Kilgour Publishing Company. They wanted to record me and my materials. They were going to fly me to Los Angeles. I got so excited I broke the contract in Nashville, thinking I was going with Kilgour. Then they changed their minds and said we'd do the recording sessions in Chicago. I really thought this was it, I am going to make it. Then came the Payola Scandal and everything went down the drain. I don't know what happened, but after that I became depressed for a while and I didn't even write for a year or two. The bottom fell out. 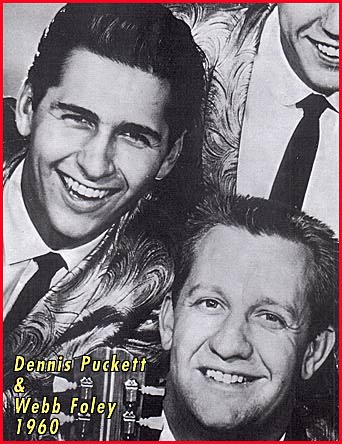 During those times I ran around a lot with Gabby Horman who took the name Web Foley (from Webb Pierce and Red Foley). Gabby and I spent quite a bit up time together traveling and doing shows. We did a lot of military bases up and down the eastern coast like Boston, Maine and New York. We never rehearsed and he would pick up guys who said 'Hey, I play this or that.' We wound up with some real characters. He would get some girl to do the twist once in a while. I know he wasn't paid much. He pulled a trailer behind his Buick convertible. If we wanted to sleep, we'd go back there and put a canvas top over the instruments and have a sleep.

He was quite the promoter and front man and overall quite a character. He came to my house a lot in Columbia City and we'd sit around that table and talk and talk. Sometimes he'd come in and say: 'Well, let's head out to California' and off we'd go to visit his mom. I'll never forget those times. We'd go all over the country back then. Gabby was also quite the athlete and played in a minor baseball league. He was also quite the boxer and taught me how to box. At one time he even pushed my records by billing me as 'The Fighting Crooner.'

Eventually, I went out on my own and teamed up with a buddy (Mike Kane) from Marion, Indiana. He and I would do impersonations and we had quite a show. We went all over the U.S. and up into Canada. Mike Kane, or Duke Shannon as he billed himself, has been with me for over 30 years. He is till playing in a 4-piece band.

Impersonations lead me to do radio jingles and commercials. Now days, my wife (Debbie) and I are playing shows as a duo.

There is so much talent out there that could have made it, should have made it and didn't make it. I don't need to play a lot anymore. It's just getting too hard out there and not like the good ol' days when people really enjoyed the music and entertainment. There are no middle class groups anymore. Now, it's you make it with big bucks or you don't make it at all.