On April 20, Sophia Wolff of the rockin@yahoo groups.com List asked the following question:


"Paul! Deke, Ronny... care to enlighten us with your expert knowledge on any recording secrets?? What are your "studios" shaped like? Number of mics, process after recording/transferring, analog vs digital, warmth, etc... So what's our list ethic on overdubs then?"

(After I finished answering her question, Bob Timmers liked my explanation so much that he suggested that it might become my next Column! Well, why not? Below is the post I sent to Sophia from the Rockin List, with some added embellishments)

Charlie Feathers at the Rollin' Rock "studio" in Van Nuys after I had discovered microphone stands! You can see this is really a den where I also keep my record collection.

Actually it's much simpler than what one might think.

Let's start with 1950s, 1960s, 1970s, 1980s, 1990s, 2000s equipment: it is of very secondary importance!! What you need to be aware of, especially if you are using "vintage" equipment, is that it'd be kept in tip top shape, which is more labor-intensive with 1950s gear since you're dealing with tubes which get very hot and have a tendency to deteriorate much quicker than solid state equipment.

I tip my hat off to Deke Dickerson and Lars of Tail Records for the fantastic job they are doing with vintage equipment, delivering an exciting rockin' sound.

When I recorded NARVEL FELTS, I recorded him both on Tascam analog and on Alesis Adat digital, and for the life of me, I could NOT tell the difference! And for all of us "purists", let's remember that the stuff is going to end up digital anyway, since this is what CDs and DVDs are!

(It is true: digital equipment from 10 years ago often sounded "harsh" and "tense", but not anymore).

Bottom line: the equipment is not the main issue!!

The main issue is: who is in front of the mike, and who is behind the mike!! 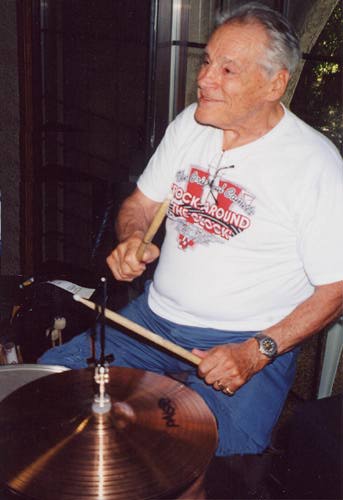 Rollin' Rock "studio" in Las Vegas: Dick Richards of Bill Haley's Original Comets. You can actually see the glass sliding door behind him.

The first time I recorded RAY CAMPI doing "Tore Up" he sounded very laid back, maybe a bit like Dean Martin, but after I screamed my head off, turning red in the face like a lobster, spittin' blood, and throwing the guitar case against the wall, while kickin' him in the butt with my cowboy boots, rantin' -- "Hey Ray, this is ROLLIN' ROCK, not a sissy-boy resting home!!!!" -- well then things started happening!! Ray caught on real fast, and delivered a smokin' ragin' version of "Tore Up", which a few years later became a Number One Hit in all the Rock'n'Roll dance halls across England!!

It was very easy to get Ray Campi to "click", because Ray felt the music deep in his heart and soul. Ray grew up on Rhythm & Blues and Hillbilly Music and therefore all he needed was a nudge, a sympathetic producer who loved and lived Rock'n'Roll Music, like ME, ha!, and who was not a groupie of de-sexed sissified anti-American 1960s crapola!

That's what I mean by who is in front of the mike, and who is behind the mike! Both positions--visavi the mike-- have to be pro Rock'n'Roll, and anti pop-schmaltz.

As far as mike placement is concerned, I do NOT like close-miking, because it tends to sound somewhat "dry" and "sterile" in most instances.

I try to leave enough room for most mikes to pick up some of the other instruments, this way the recording will sound more natural, like you are in a small night club, but not as muddled. 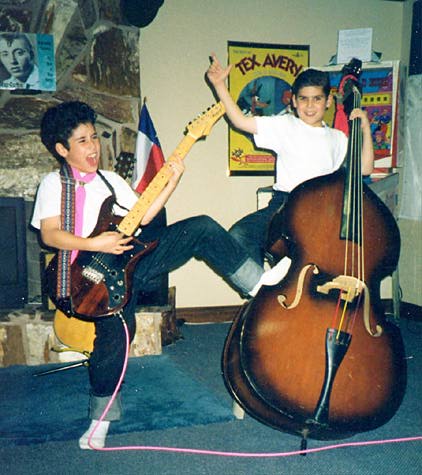 Actually on the first few albums I was not aware that you were supposed to have mike stands!! I mean, I had seen them on television, but hey that's television, not the real world!! What I used to do was to sling the microphones over the doors, and the artist would try to reach them! I had forgotten about this, until Mac Curtis reminded me!!!

And since I mentioned MAC CURTIS, I think I was the first creature on earth to actually record a drum machine! Around 1973 it was hard to locate good rockabilly drummers, so once, or twice, I used a drum machine, a cheap toy which was covered with the kind of self-stick paper used to line drawers! It was Mac Curtis singing "For Your Love", Rollin' Rock LP-002. For many years I was scared sh*tless that anybody would find out about my little peccadillo! Nobody ever found out, but here now I am spilling the beans!

Interesting enough 25 years later this song was used in the movie "Finding Graceland" with Harvey Keitel and Bridget Fonda.

Other substitutes for drums were trash can lids, banging the guitar on the strings while the left hand played the chords (the Ray Campi technique), and last, but not least, my own special Slappin' Stapler technique, for which I am the only practitioner in the world! Ah, and of course the Slappin' Knee, as I used on Charlie Feathers' masterpiece "That Certain Female".

I use tape echo for the voice, not digital delay.

I place the drums near the sliding door glass window to get more of a crashing sound. 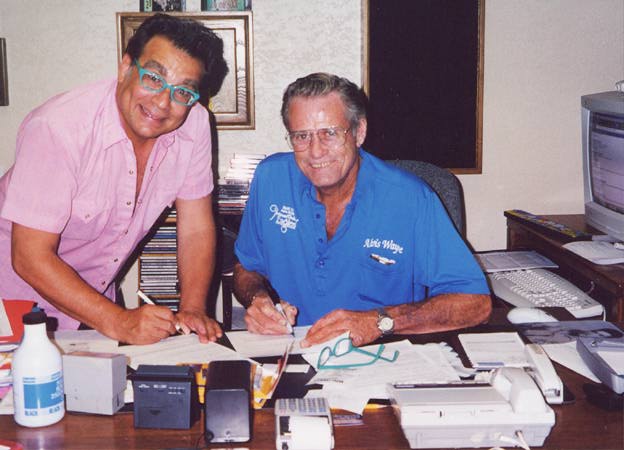 My current Las Vegas studio is not a studio, but a normal home office with desk, computers, easy chair, shelving unit, and NO soundproofing of any kind.

Soundproofing is not very helpful for Rockin' Music; it tends to take some of the edge away.

On a CHUCK HIGGINS record, he sings the following line:

"Well, I finally found my baby!" And then with perfect timing my dog barks: "Woof, woof, woof!"

Listen to the Rollin' Rock Records carefully: there is more in there than what you paid for!! All at no extra charge! :-) :-)